BLITZ: “HOW TO ELIMINATE ALL YOUR OPPONENTS IN ONE MINUTE”

Blitz the fastest and most dynamic discipline of the championship; it is a fast elimination tournament. Competitors are standing forming a “circle” and holding their cylinder or padlock in their hands, having extra tools stuffed in their pockets. Each competitor has only one minute to open the lock to advance into the next round. If they fail to open they are, of course, eliminated.

HIGHLIGHTS FROM THE PAST

Sometimes, interesting locks appear in the competitions. In 2017, in the championship held in Orlik Marina, an Austrian lockpicker Heinrich Sparber brought an intimidating extremely long euro cylinder that was used on a boat, its size was several tens of centimeters.

The same year the youngest contestant ever to compete in the contest, Nelly Coufalová (9 years old) who competed under supervision of her father eliminated several opponents with her tiny padlock from her diary. It was so small it proved difficult to hold or tension it. 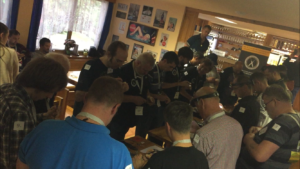 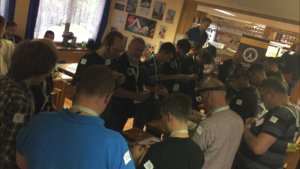 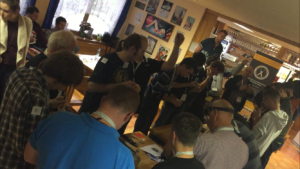 BLITZ IN THE CZECH LOCKPICKING CHAMPIONSHIP 2019

In this year’s championship, the rules of blitz reman the same. The maximum number of competitors is set to 48. The rules are described in more detail below.