Championship disciplines under the microscope: Impressioning

Championship disciplines under the microscope: Impressioning

IMPRESSIONING: “A CONTEST IN FILING THE KEYS”

While preparing the anniversary Czech lockpicking championship, it occurred to us that we could write for our readers, lockpicker, partners and sponsors a closer look at the individual competition disciplines and perhaps also mention some interesting things from the past championships.

THE DAY OUR HISTORY BEGAN

September 18, 2010, in a sports club Sokol in Prague Vršovice. It was an important day for lockpicking in our region. Many lockpickers from the Czech Republic and Slovakia entered the competition, which included several disciplines including impressioning. In the impressioning contest, there was a time limit of 60 minutes and only a single contestant was able to produce a working key, some competitors even withdrew from the contest.

Impressioning is one of the harder disciplines; it requires precision, skill and a lot of patience. Evžen Ivanov became the only Czech impressioning champion. For a long time, this discipline did not reappear at the championship for one simple reason: there were very few others that mastered the craft. This year, however, impressioning will once again find its place in the 2019 lockpicking championship.

Impressioning, simply put, is the process of determining the shape of a key. There are two different techniques termed impressioning. The first one uses an original key which is imprinted into a soft material to form a mold used to cast a new key. The second is more interesting for lockpickers because it involves getting a functional key directly from the lock without damaging or disassembling it. At our championship, we will compete in traditional impressioning, where a key blank is used to produce the key by filing it with a hand file.

In some areas of the world, impressioning is relatively common and one of the basic locksmithing techniques. Here in the Czech Republic, it is mostly unknown. For a long time, Evžen Ivanov, the pioneer of Czech lockpicking, was the only one who mastered the technique of impressioning and was able to compete with foreign competitors.

To learn more about impressioning, we organized a workshop for the members of our association in 2017. We invited German specialists Dr. Torsten Quast and Bill Lenze from the German SSDeV (Sportsfreunde der Sperrtechnik Deutschland e.V.). During the two-day seminar, we had the opportunity to study the theoretical foundations and also to try to practice opening Abus and FAB cylinders. As part of the 10th annual Czech Championship, we decided to include the impressioning discipline in the program and thus support the development of our members in cooperation with international experts. 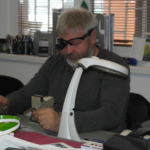 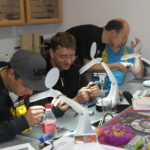 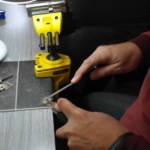 IMPRESSIONING IN THE CZECH LOCKPICKING CHAMPIONSHIP 2019

For this year, we are expecting contestants from both the Czech Republic and other countries. Compared to 2010, where there was only one competition round, this year’s competition is already divided into two parts, similarly as in the German and Dutch championships. In the qualification round, all the lockpicks seated at several tables have a time limit of 40 minutes to open the cylinder that we provide for the competition. The first 4-6 contestants to open the lock advance to the A finals. The next 4-6 contestants advance to the B finals, others are eliminated. In the finals, there will be multiple 20 minute rounds. The complete competition rules of this discipline are described below.

Note: Exact lock brands and models will be known in advance.